The Day In the Life of A Cartoonist

How does a cartoonist spend his or her day? It's different for everyone, but here's what I do. 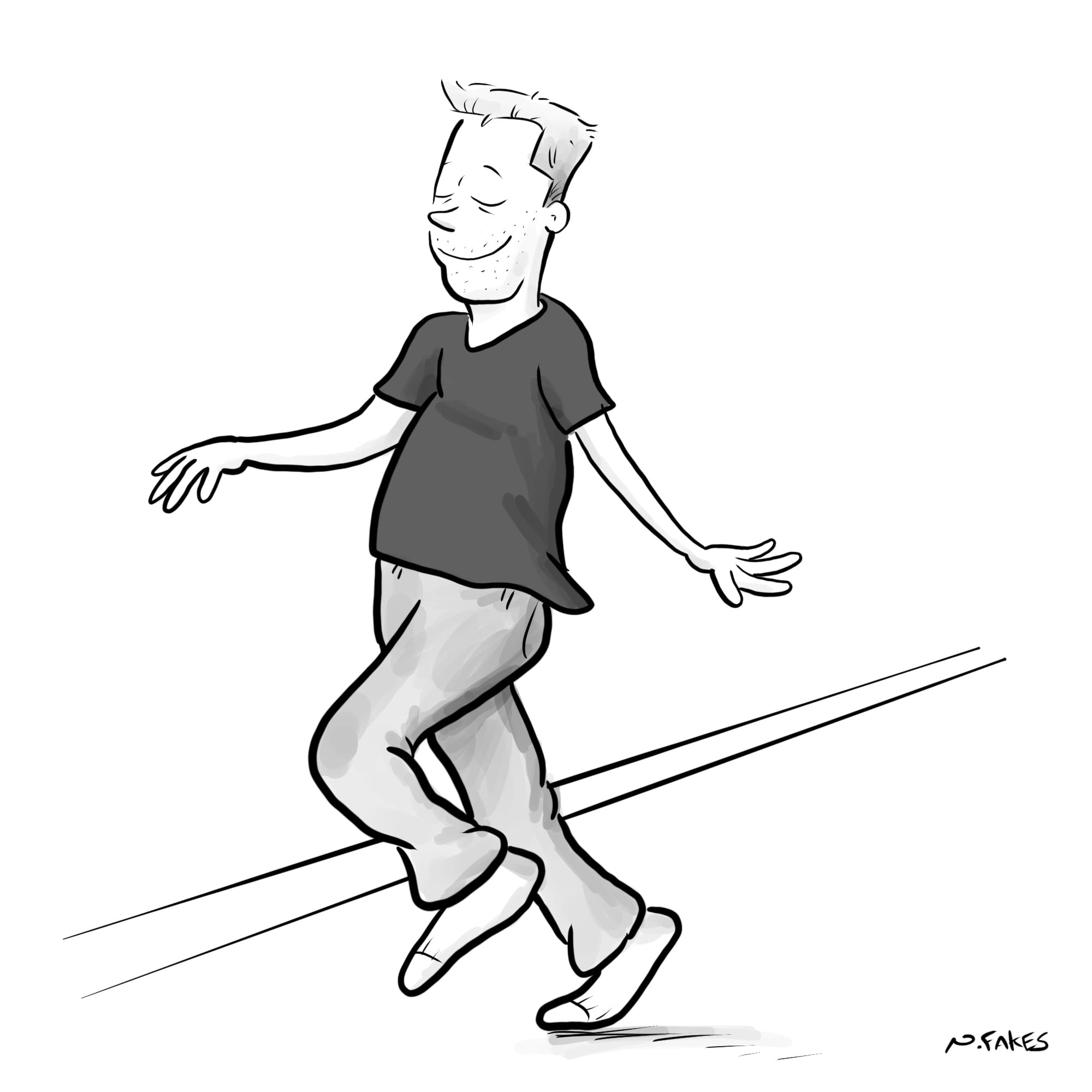 About 5:30-ish, or somewhere in that ballpark. Currently, it’s dark outside. The occasional car comes down my lane, but it’s pretty quiet still. Just the buzz from my fan that I use for ambient noise.

“Do I get out of bed now? Oh, man. I could definitely snooze. So comfy. But, I need to get to work.”

“If I spent just another 15 minutes or so snoozing, I wouldn’t be missing out on THAT much productivity, would I?”

My mind bounces around, over-analyzing everything about my upcoming day. There’s a bit of anxiety that sometimes hits (“Oh my gosh. That writing project needs to be done.”) and I reach for my prescription glasses, quite awkwardly (I always forget exactly where I put them before bed).

I rub my eyes, toss on my shorts, the t-shirt I wore before crashing out and head over to the coffee pot. Above it, are the coffee bags. I pour out an ample amount of grounds on the filter and let er’ rip.

While the coffee is brewing, I feed Tiger (my cat), quickly scan my phone for any new messages, and, if I’m feeling very productive, run upstairs and toss in some contact lenses. (They’re bound to be popped-in at some point, but not often this early.)

That is my typical morning. It’s a ritual that has recently adjusted since working out of my studio.

When I used to commute to an agency as a full-time cartoonist, it was a bit different. I had to go shower, clean myself up, make coffee, and then skedaddle to work.

So, times have changed…

Every cartoonist has a different path. It’s never a cut and dry position for any of us, typically. Even if you have a coworker on the same project as you, it’s different (for example, working as a storyboard artist on the same animation).

Chances are, if you’re a cartoonist, you have side projects and other things you’re doing besides your job. There’s always something else going on besides the work that has to be done.

My story is one of a variety of things. I’ll go over what I’m doing right now. Today. If I were to go into detail about how it’s evolved and has fluctuated over time, this post would be a massive, thousand-plus page, nonfiction novel.

Keep in mind that this will probably change, too. But, as of right now, this is pretty much a snapshot of a day in my life.

First, let me start off with this…

Cartoonists, I feel, have defining characteristics:

Let me try to explain.

I have never had the experience as a professional cartoonist where it’s just the one thing: cartooning.

Throughout my career, I’ve worked as a writer, illustrator, and then — when nature calls — a cartoonist, where I’m putting illustrations and words together to form a comic.

Then, when a lot of the legwork is done, I have to sell myself. It’s more selling myself than my work half of the time. I have to be convincing that I’m the man for a job, project, or whatever it may be. Nobody wants to hire a schmuck (and I already have a reputation as one of “The Usual Gang of Idiots” from MAD Magazine).

It’s like numerous professions. It’s not just the ONE defining thing that can make someone a cartoonist.

You get the idea. It’s not JUST being a musician. There are a lot of categories that go into this. Many musicians also teach, are audio engineers, and singers. I’m sure I could go on and on. Think of ANY creative profession, and I’m sure you can come up with numerous categories in the job description.

Back to being a cartoonist…

You get it. I DON’T just sit in my studio all day, creating drawing into little panels. It’s way more than that. And, for me, the time of actually cartooning isn’t as much as you’d think.

Of course, there are some cartoonist that do just the one thing: drawing cartoons. Although, I don’t see it much (unless that cartoonist has a writer and is making a sole living off of drawing). Even the professionals that can get away with doing this often have another side project they’re developing. As creatives, we typically aren’t satisfied with just one thing.

So here we go.

On with my morning. As I’m drinking my coffee, I like to sketch out ideas. Sketching is also writing to me. I typically write and sketch at the same time.

Currently, the things in my sketchbook are for my syndicated feature, Break of Day.

Break of Day, for me, isn’t my living. At least not by itself. I don’t make a lot of money off of syndication, licensing, greeting cards, and more. That being said, the feature is my calling card and has led to major projects, such as my work for Red Bull, storyboarding, clients, and writing projects. Without it, I’m not sure where I’d be. So in essence, it actually pays quite well. Hope that makes sense.

It also keeps my brain fresh and doesn’t make for bad Instagram posts, so I’ve continued to crank them out regularly for over a decade now.

After sketching, what I’m currently involved with now is writing for websites. It’s a consistently paying job that allows me to write humorously, and also — when I get a chance — slip some of my cartoons and illustrations in the mix.

Currently, this is about eight hours of my day.

I generally work on writing from 9-5, from my studio. This is fairly new to me (writing so much). But, I enjoy writing. And, as I mentioned before, it’s part of cartooning.

Before all the writing projects came along, I developed a young adult graphic novel. It’s being shopped around right now from my agent. I feel pleased about that, and it allows me to relax for a moment and sees what happens. If accepted, I’ll be working twelve-hour days, drawing a lot more than I currently am.

With all of this writing and, again — when/if my graphic novel gets published — Break of Day has taken a bit of a beating. I don’t churn them out as frequently as I want. But, I still keep writing to them. Actually creating the comic, I try to do a few new ones a week (generally in the mornings, after sketching).

And that’s a wrap.

Something else I do is adjust my schedule accordingly. If I get busy with a lot of projects, sure, I may have to set that alarm earlier. And boy oh boy, will I need that coffee.

This is me currently. Before I was this busy, I was marketing myself quite a bit, TRYING to get this busy.

Last August, I quit my position as an in-house cartoonist, where I made a comfortable living and didn’t really have to “put myself out there” as much. However, I left for various reasons (as you can read here) and things have changed a lot over the past five months.

There are moments as a freelancer where there is serious dread. I just bought a home, and have a family support. I took the plunge of leaving my agency position without a safety net.

I get asked if that was worth doing.

It’s a hard answer, and quite frankly, not sure I suggest it unless you’re setup better than I was. BUT, also, it all worked out. So, it’s hard for me to answer with a yes or no — but I lean more towards ‘yes’.

I don’t think stress and anxiety are healthy for anyone (I think I got quite a few new gray hairs from the experience), but taking risks is a good thing, or else you don’t get anywhere. I’m going to let you decide what you feel is best.

I would’ve, maybe, done things a bit differently, but I don’t know. I wish I had more of financial savings before going off on my own, that’s for sure. However, again, it all does tend to work out and I was able to do things I wouldn’t have been able to do as quickly (like my graphic novel and the website that you’re on). It’s weird, but I think the universe does look out for you and has your back, even when the overwhelming stress is almost to the breaking point.

And you know what? That’s what I love about being a cartoonist. I get tired of doing the same work over and over, so when I can mix it up, it makes me happy. I don’t like being financially unstable, so that’s an area that I’m learning more and more to become better at. If you’re a freelancer, you know it’s sometimes feast or famine. Yeah, I like a feast.

For the most part, I’m enjoying my days.

I was talking with an ex-coworker cartoonist at the agency I was at. I mentioned to her that I do miss having people around sometimes. It can get, well, lonely. We had a nice group of talented individuals, and I believe there is something to be said about being around people you want to be around. Cartooning can be very solitary. It’s nice to have my own home as an office, no commute, and it’s true about working in pajamas — I do (that or my boxers). However, there are times I think about being around a bunch of amazing people. So, it is what it is. Nothing is perfect. In general, I like the freedom I have more than being stuck in an agency.

Time to eat, relax on the couch and watch some television that I’m ashamed that I enjoy (90-day Fiancé, anyone?).

Before bed, I read a lot. I generally have at least one novel, and then one educational book (like on creativity, writing — stuff like that). If you want to be a cartoonist, you have to read a lot to write a lot. I preach that all the time, and I think it goes without saying.

If I’m lucky, I’ll sleep well. My mind races a lot with various things (again, pretty typical in a creative field) and sometimes I’m up late. But, in general, I try to be in Slumberland by 10 PM.

Usually, my last thought is, “Aa, I can’t wait to have coffee in the morning,” and get ready to start it all up again.

Cartooning. Where to begin?

How to Draw A Cartoon: Episode #1 — Cold and Birds

6 Solid Social Media Platforms and Tips for Cartoonists in 2019